This report provides a synthesis about the design and the experimentation process of these training modules in each national context. It has been elaborated thanks to the materials produced and also collected by each national team: modules description, logbooks from trainers or teachers, quantitative data, examples of students’ productions and finally, some pictures from the workshops.

The European synthesis on the training modules experimentation is structured in five parts. After introducing to the variety of contexts of experimentation, a general educational scenario will collect media education activities coming from the four training modules.  Thereafter, an overview of the methodologies used and the topics addressed will complete the analysis of the training modules supplemented by some comments through the media education perspective. The third part of this report will summarize the most significant learning situations and the students’ participation during the experimental workshops. It will be followed by some suggestions coming from the students to fight online hate speech. Finally, some challenges and open issues will be identified before the final conclusion. 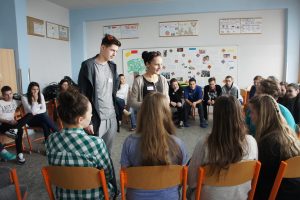