The European project BRICKS aims to combat the spread of hate speech against migrants and minorities through media education and active involvement of users and producers of content on the web. Instead of focusing only on the potential negative consequences of youth uses of the Internet, the goal is to explore the opportunities for an intercultural dialogue on the web. In this context, Media Animation, Belgian partner of the project, organized a training for teachers, educators and animators working in various sectors (socio-cultural, youth …) on the theme of freedom of speech and caricatures to fight against hate speech.

This training aimed at providing a theoretical basis for teachers, educators and animators on freedom of expression and to train them to use the tool “Draw me the freedom of speech” (“Dessine-moi la liberté d’expression” in French) with their groups of young people. This was also a chance to gather the opinions and suggestion for improvement of these professionals on the tool so that it may be modified before the start of experimentation with their young. 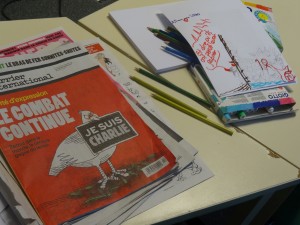 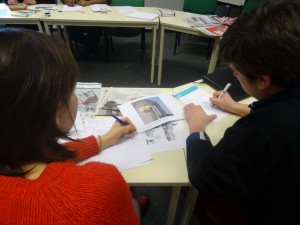 Course programme and dynamics of the training

The training took place over two days: Thursday, February 14 and Friday, February 22, 2016. A total of 10 people (teachers, trainers and animators) were trained. The participants were very involved in the training and particularly in exercises and discussions offered around freedom of expression, around the fight against the discriminatory stereotypes and caricatures.

During the first day, participants worked on caricatures in various newspapers (online and offline) and put them back in their context and in relation to the news. They discovered the specifics of caricature (magnification of features, criticism …) and they saw how this media plays with the limits of freedom of speech and how the receiving context (which becomes multiple with online media) can modify the meaning of the caricature. Participants also learned the codes of caricature and used these codes in different exercises in order to better understand their mechanisms. Finally they received a grid to analyze caricatures that they tested by themselves to see if it was relevant to use with young people. Feedback from teachers, educators and animators have improved the grid to make it more suitable for young audiences. 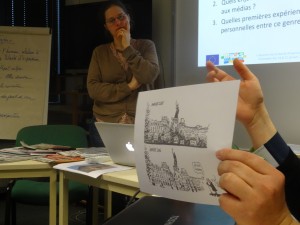 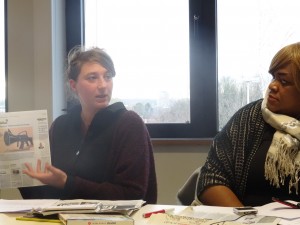 The second day, participants discussed issues around freedom of speech and hate speech and identified stereotypes in various caricatures.  Stéphane Hoebeke, legal expert from the RTBF (Belgian French-speaking Radio and Television) and author of the book La liberté d’expression : pour qui ? pour quoi ? jusqu’où ?” (Freedom of expression: for whom? Why ? How far ?) came to present the legal context of freedom of speech in Belgium, especially in media online and offline and in relation to hate speech. This intervention allowed participants to ask any questions about it, because they are often clueless facing the questions from their students. Participants found that knowing the legal framework of freedom of speech would allow them to deal more calmly the question of hate speech and caricatures with their young, because it is a sensitive subject with boundaries that are often blurred. By identifying the various discriminatory stereotypes in caricatures, participants were also able to question their own limits and their own tolerance to this form of humor. At the end of the training day, participants asked any questions regarding the use of the tool with their groups of young people and exchange ideas of best practice to implement the tool testing. 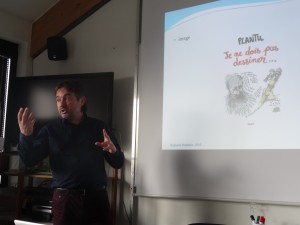 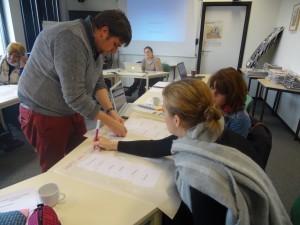 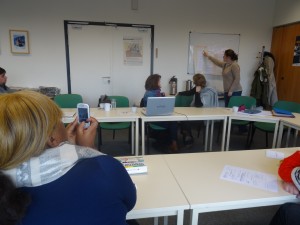 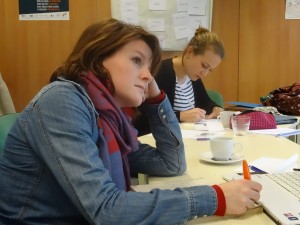